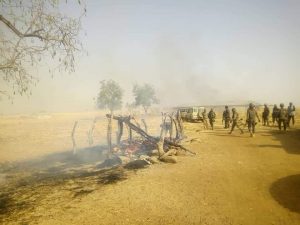 The Ghana Education Service Directorate in the Northern Region has ordered all head teachers in the Chreponi district not to reopen schools until calm is restored following recent clashes there.
Sources in the GES say the decision to keep the schools closed is to ensure the safety of the students and staff.

Some SHS students were expected in school today [Monday].
A curfew was imposed on the Chereponi township effective Thursday, January 3 after the clashes had resulted in four deaths and left several wounded.
Homes were also set ablaze following the eruption of violence between Anufuls and Konkombas over a piece of land at Naduni.
Scores of military personnel have also been deployed to the area to keep the peace.
Fears of health workers
Health workers in the area have expressed concern for their safety.
On Saturday, the Chereponi branch of the Association of the Registered Nurses and Midwives appealed to authorities within the district to evacuate them from the area.
But the Ghana Health Service (GHS) declined a request by nurses and midwives in the Chereponi District of the Northern Region to be evacuated following clashes in the area.
“The regional minister has agreed in principle for both the health workers and the hospitals. For now, they (nurses) are not moving but when the need comes for us to go back and consult the regional security council, we will do so and see the kind of advice they will give to us. So, for now, the situation is the health workers are not leaving,” the GHS PRO stated.
Protest of curfew
Some residents did not take kindly to the curfew and burnt tyres in protest.
There were reports that residents in some neighbouring communities were trooping to the Chereponi township to seek refuge, but the security personnel  prevented them from entering Chereponi town due to the curfew.
When the curfew was announced, for the townships of Chereponi and Saboba, some residents were perplexed because no acts of violence had occurred in their communities.
Some residents also demanded the sacking of the Defense Minister, Dominic Nitiwul.
Some said the Defense Minister, who is a Konkomba, is not handling the land dispute fairly.
“Dominic Nitiwul must step aside so that a neutral person comes in. For a neutral person, we believe he can bring the two parties together if he had done his work well this issue would not have aggravated, and now look at the time he took to send in the military, when distress calls were made,” a resident said to Citi News.
–
By: Ann-Shirley Ziwu & Delali Adogla-Bessa | citinewsroom.com | Ghana

History Of Bolgatanga, The Capital Of Upper East

The iPhone 8 May Be Bigger Than The iPhone 7, Its Predecessor