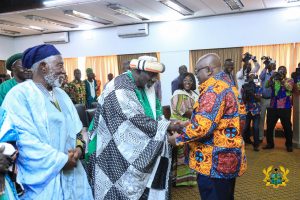 The Head of the Andani Royal Family, Yoo-Naa Abukari VII, and the Kampakuya-Naa, Yakubu Abdulai Andani, have indicated their readiness and preparedness to hold the funeral of the late Ya-Naa, Yakubu Andani II, from Friday, 4th January 2019.
This was after the Vo-Naa, Mahamadu Bawa, conveyed the message, on behalf of the Andani Royal family, to the President, Nana Addo Dankwa Akufo-Addo, on Thursday, 27th December 2018, at Jubilee House, the seat of government.
Speaking at the brief ceremony, the Vo-Naa, who is Chairman of the Funeral Committee, noted that “with the final funeral rites of Ya-naMahamudu Abdulai about to end on Friday, 28th December 2018, the Andani Royal Family is ready and willing to commence the funeral rites of Ya-Na Yakubu II on 4th January 2019, and complete it on 18th January 2019.” 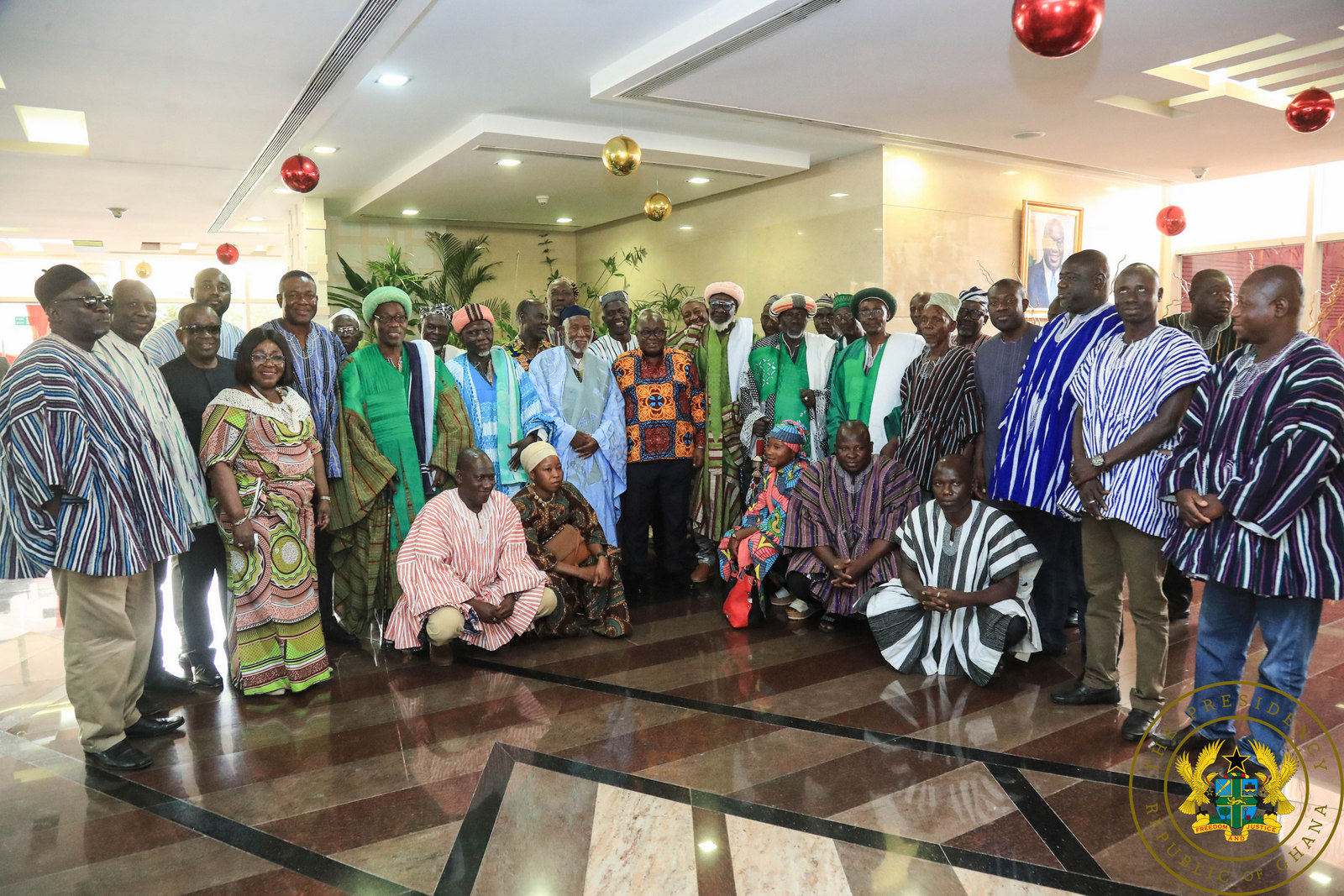 He also used the opportunity to thank President Akufo-Addo for helping to ensure “a united Dagbon”, and, thus, invited the President to the final funeral rites of Ya-Na Yakubu set to be held on Thursday, 17th January 2019.
Vo-Naa Mahamadu Bawa also urged the Government to continue to do all it can to bring the killers of Ya Na Yakubu Andani II to justice, to bring closure and finality to the matter.
The children of the late Ya Naa Yakubu Andani also reiterated their commitment to the success of the Dagbon peace process. 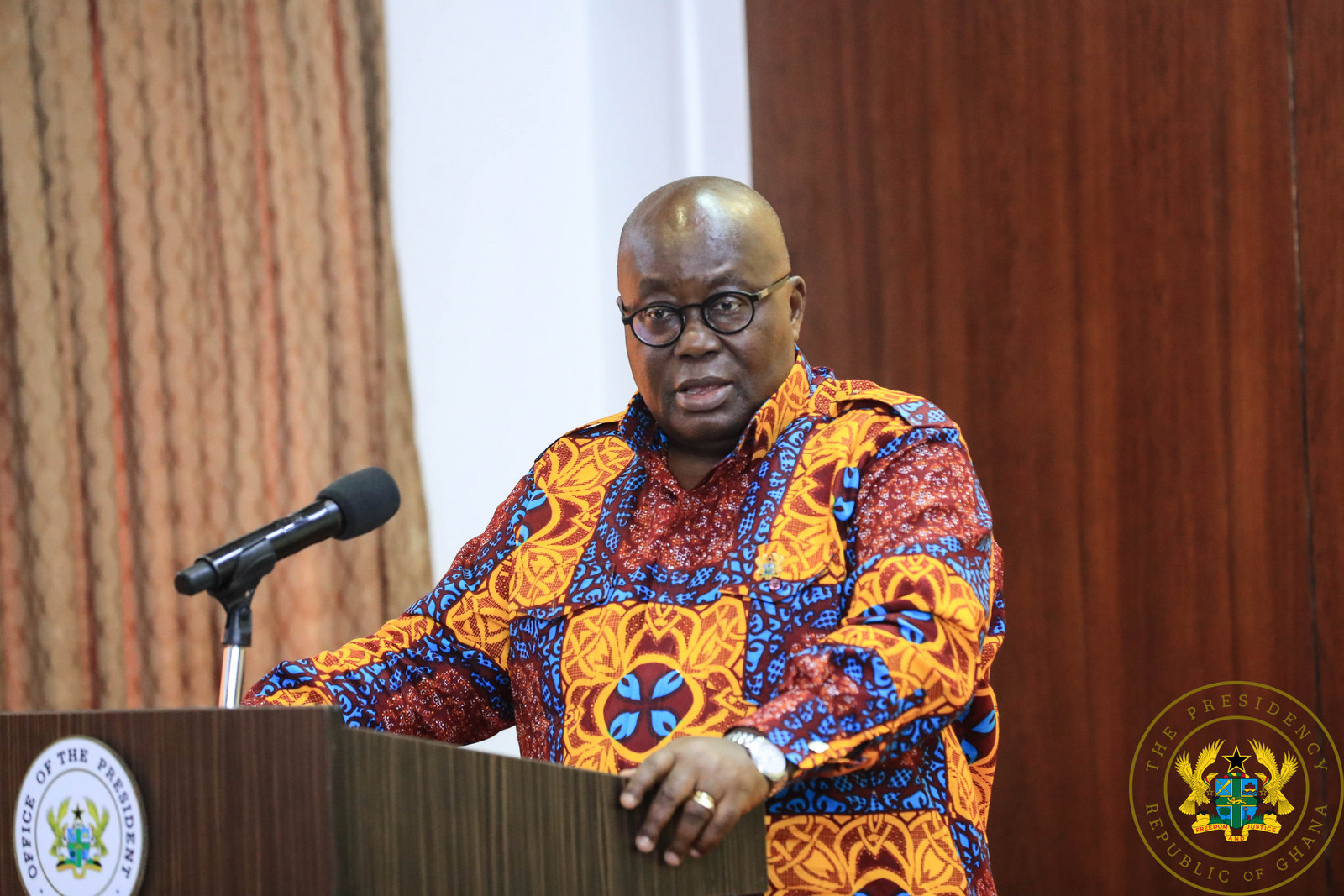 “We the children have made it clear that whatever we have to do or we must do to ensure that Dagbon gets lasting peace, not a short-term one, we are out to do it. We are with our President today, and we have made it known that whatever that must be done, as children of the late Ya-Naa, we are ready to do it,” Mohammed Alhassan Andani added.
On his part, President Akufo-Addo expressed his gratitude to the Head of the Andani Royal Family for the message, describing it as one “that everybody in Ghana will be very happy to hear today, and, as coming at the end of the year for those of us who are Christians, can be described as a big Christmas present.”
The President was overjoyed that the process for the holding of the funerals of Naa Mahamadu Abdulai and Naa Yakubu Andani II was going on peacefully. 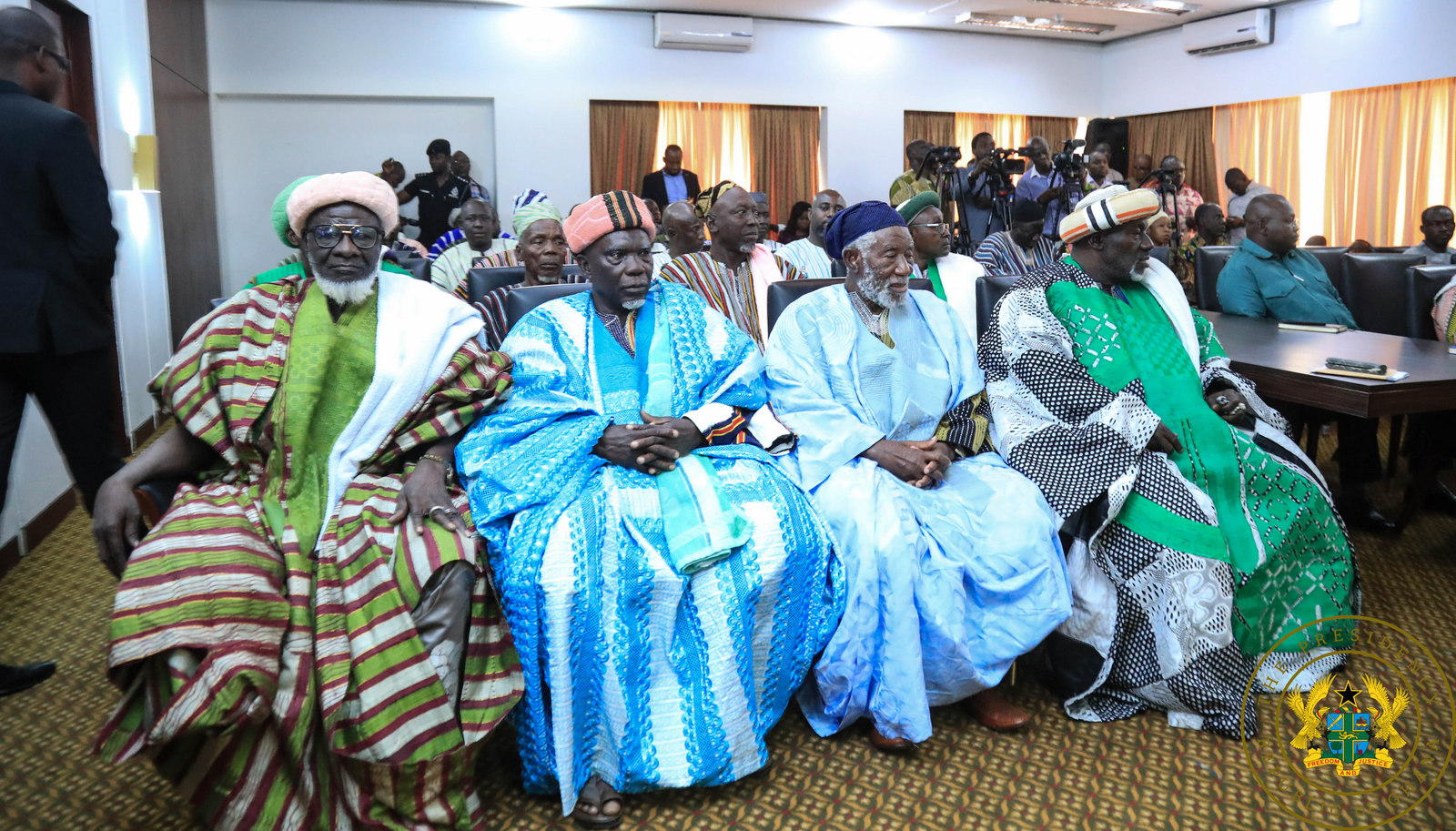 The compromises made along the way by the Abudu and Andani Royal Families, President Akufo-Addo said, are signs of the commitment to the process and the restoration of peace and normalcy to Dagbon by both families.
“You can never make peace without compromises, and I think, in so far as those compromises have been made, and where we are today, it is to the credit of the entire people of Dagbon and to you, the leaders, that you have heeded the advice for peace,” he added.
President Akufo-Addo continued, “I am particularly happy that, in my time as President, these funerals can finally take place, and honour be done to them according to custom.” 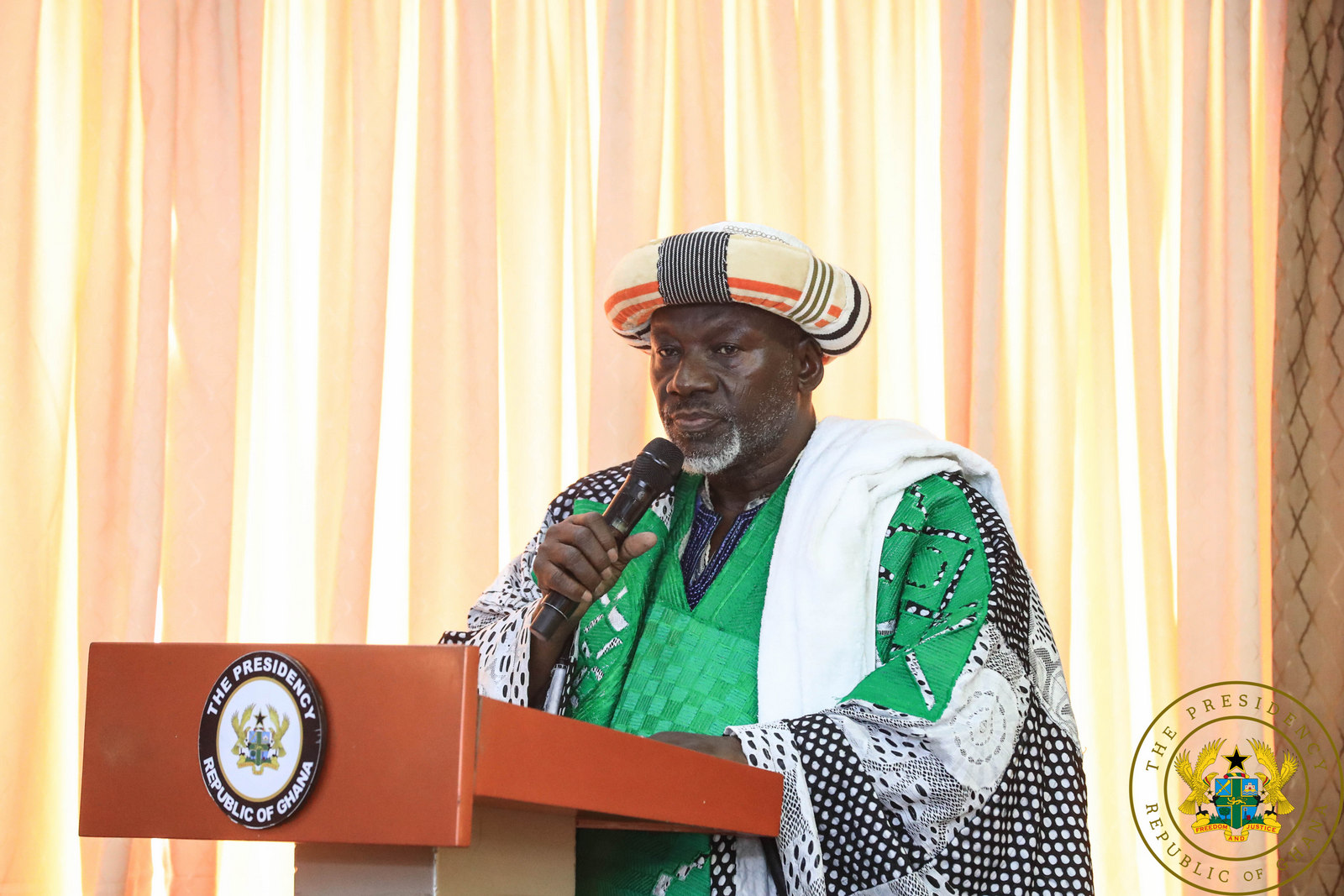 He assured the Andani Family that the events that led to the death of Ya Naa Yakubu Andani could never go away, and assured that “whatever needs to be done to unearth the truth has to continue to be done. I am a firm subscriber to that point of view. Criminal conduct can never go away; there has to be accountability for it.”
The law enforcement agencies, he said, will need the co-operation of the people of Dagbon to help unravel the truth about the death of Ya-Naa Yakubu Andani II.
President Akufo-Addo congratulated the Yoo-Naa, the Kampakuya-Naa, and the elders of Dagbon for their sense of responsibility and statesmanship in bringing the process thus far. 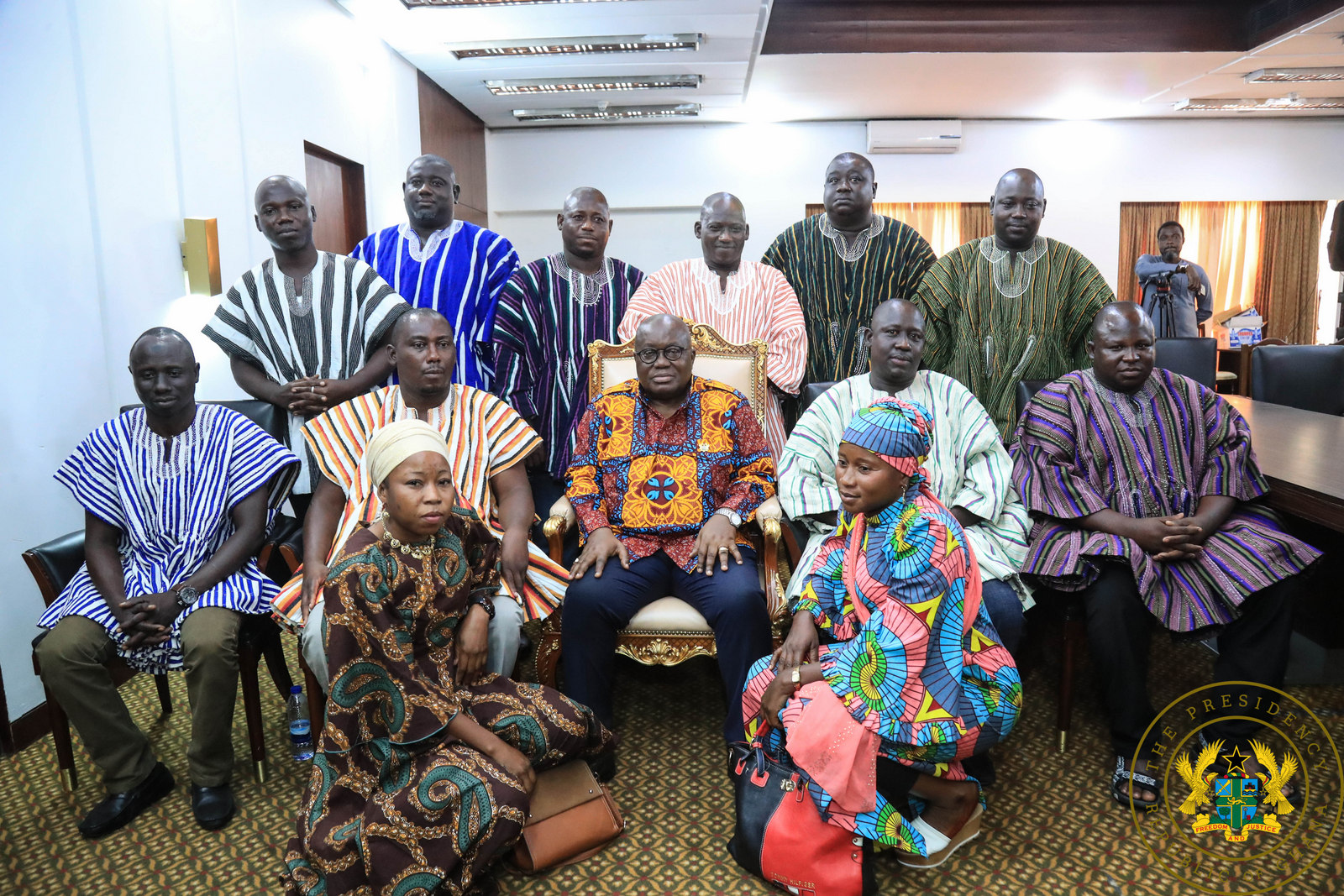 “We will continue to count on you to shepherd us through the rest of the process, and then have a new Ya-Naa duly installed, who can bring all of Dagbon together, again, to become one of the most important traditional areas in our country,” he added.

Islamic SHS students in trouble for dancing ‘One Corner’ in class

Billy Blue, from a convict slave in America to Australia's first black entrepreneur