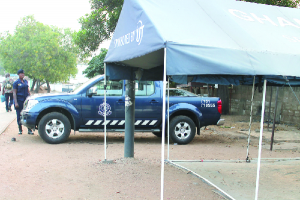 The Ministry of Interior has renewed the curfew on the troubled community of Nakpachie and surrounding villages in the Northern Region as well as eight other communities including Japekrom and Drobo in the Jaman South Municipality of the Brong Ahafo Region.
The Ministry in a statement said the decision was taken based on the advice of the Brong Ahafo and the Northern Regional Security Councils.
“Government calls on the chiefs, elders, opinion leaders, youth and people of the affected areas to exercise restraint in the face of the challenges confronting them as well as to use non-violent means to channel their energies into ensuring peace.”

“Meanwhile, there is a total ban on all persons in the aforementioned communities and their environs from carrying arms, ammunition or any offensive weapons and any persons found with any arms or ammunition will be arrested and prosecuted,” the statement signed by the sector Minister, Ambrose Dery added.
The affected communities in the Brong Ahafo Region include Drobo, Japekrom, Babianiha, Kwasibourkrom, Mpuasu, Basakrom, Kojokesekrom and Katakyiekrom all in the Jaman South municipality.
In the Northern Region, the curfew on Nakpachie and its surrounding villages in the Yendi Municipality of the Northern Region was also renewed.
Clashes in Nakpachie
The Northern Regional Security Council (REGSEC) on November 9, 2018 imposed a curfew on Nakpachie, a small community in the Yendi Municipality after violent clashes there.
The clashes left one person dead with some houses burnt.
A joint Police and Military team was later deployed to the area from Yendi to ensure security.
Shooting at Japekrom
There was also trouble in Japekrom in October 2018 over a shooting incident by some unknown assailants in Drobo, a rival town.
Official Police report said two persons were confirmed dead, while 14 others were in critical condition.
The communities were eventually slapped with a dawn to dusk curfew.
–
By: Godwin Akweiteh Allotey | citinewsroom.com | Ghana

Be Ambassadors For Development: Nadowli-Kaleo Director of NCCE admonished People of Dapouri