A few years after Babatu had been defeated completely, the whole of Northern Ghana, then called the “Northern Territories of the Gold Coast”, became part of the British Empire. Soon after a campaign by Lieutenant-Colonel Morris against the Bulsa in 1902, the Sandemnaab Ayieta and a delegation of Bulsa men went to Gambaga, where Bulsaland became part of the Northern Territories. The Sandemnaab Azantilow remembered that he was a very small boy during that event. He told me that the following men accompanied their chief: Azuboro from Abilyeri, Abeuk from Awusiyeri, Afande from Tankunsa, Akanyame from Kobdem, Anab from Longsa, Akung from Nyaansa and others. One of Ayieta’s younger sisters joined them as their cook (endnote 10).
During the First and Second World War, Bulsa fought in the British army. There is a photo in Rattray’s book (1932: 398) on the Tribes of the Ashanti Hinterland showing Sergeant Major Solla and John Kanjaga, both awarded with many war decorations. John Kanjaga had fought in the bloody battle of Verdun in 1916 (see photo). 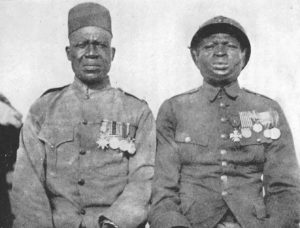 When the Gold Coast became independent in 1957, this event was much welcomed by the Bulsa. Their enthusiasm for the new Republic called Ghana can be seen from the fact that many Bulsa fathers in 1957 called their new born children Aghana, Aghanalie, Ghanatta and so on.
In the early 1970s, the Sandemnaab Azantilow together with the Bulsa Youth Association and the divisional chiefs discussed the idea of a big annual festival in Sandema. According to Mathias Apen (Buluk 2015: 109), Mr Henry Akanko, the Chairman of the Bulsa Youth Association, presented the idea to the Sandem-naab Azantilow in 1973, who approached the then District Chief Executive, Mr Kwesei Marfo, for assistance. The DCE “accepted his idea and decided to commit his time and some of the resources of the Local Council to its organization” (p. 110).
The first Feok Festival, which was held in 1974, was based on the following ideas:
1) Like the religious feok harvest sacrifices in the traditional compounds, it should be a thanksgiving feast for a good harvest. This might be the reason why it is always celebrated in December.
2) Moreover, it should recall the defeat of Babatu in the battle of Sandema, which, under the command of Sandema, was fought by warriors drawn from nearly every quarter of Bulsaland.
The Feok-Festival has helped unite all Bulsa in friendship and harmony.
Although, in some early reports, the Bulsa are described as fierce warriors who fought decisively against Babatu as well as against the advance of the British in 1902, Bulsaland, according to A.K. Awedoba (2009: 113-121) has been almost completely spared from inter- and intra-tribal conflicts in recent times.

All You Need To Know About Tamale Senior High School, Tamasco

The Plight Of The North