Members of the major opposition National Democratic Congress Party (NDC) have on Saturday January 26, 2019 stormed the Wa Central market with massive clean up exercise to keep the market square tidy. 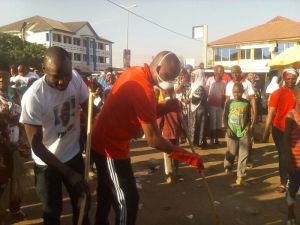 The exercise was organised by the NDC Wa Central Constituency after realising that the legacy left behind by the former MCE Hon. Issahaku Nuhu Putiaha for the Wa Municipality under the erstwhile NDC administration was thrown to dogs after the monthly clean up exercise instituted by the former MCE in the Municipality was left to its fate when NPP took over the affairs of the country in 2017 after power was ceded to them.
Speaking to journalists, the Wa central constituency Youth Organizer, Mr Abdulaih Ibrahim, says the NDC is determined to reclaim the once declared clean region in Ghana back to its position by mobilising and organising monthly clean up exercises within the regional capital.
He said the party seeks to cut down the increasing rate of reported malaria cases at the various health facilities in the constituency by way of frequently cleaning the constituency.
On his part, the former MCE and also the regional Organizer of the NDC, Hon. Isaahaku Nuhu Putiaha who was part of the clean up exercise stated that, the party in power paid less attention to sanitation and boycotted the monthly clean up exercise they came and met hence the need for the them as a party to also put their bid in ensuring that, the environment is clean.
He thanked the constituency Youth Organizer and the party folks for taking the move and pledges to lend his support to anyone who might intend to take similar actions.
Meanwhile, the exercise which started at the paty’s constituency office was led by the Upper West Regional Chairman of the NDC, Mr. Saani Nasirudeen (BUNAS) and ended at the forecourt of total feeling station in the Wa Central market.
It was joyous when the brass band group took the NDC’s 2016 general elections campaign song ‘Onaapo’ to the market square and some market women who could not withstand the jubilant and dancing crowd had to defy their transactions and joined the group in the exercise.
The exercise brought together the regional party chairman, the regional Organizer and some party gurus both regional and constituency levels including the Wa Central constituency chairman Mr. Mohammed Sule.
By: Saeed Fatawu
READ  Suspected cop killer arrested

Communities Up North Warned By NADMO Over Spillage Of Bagre, Kompienga Dams In Burkina Faso

Don't Expect the Insurance Industry To Protect You From Climate Change