Disgusting! That was how the apartheid South African government described the marriage between Joe Appiah, a young lawyer from Gold Coast (now Ghana) and Peggy Cripps, a white woman and daughter of Labour politician and former chancellor of Exchequer Sir Stafford Cripps.

During that period in Britain, interracial marriages were largely absent and a white girl who was seen out with a black man was deemed not “respectable”.
In 1948, marriage between the races became a major story in Britain after Seretse Khama, chief of the Ngwato or Bamangwato people, (present-day Botswana) married a British woman, Ruth Williams, in a love affair that nearly became an international crisis.
The British government raised serious concerns over what an interracial marriage would do to international relations between them (British government) and South Africa, Botswana’s neighbouring country that had just passed a law against mixed marriage.
Having banned interracial marriage under the apartheid system, South Africa was not ready to have an interracial couple ruling just across their northern border.
The tension their marriage caused had not yet died down when Appiah and Peggy announced that they were getting married. 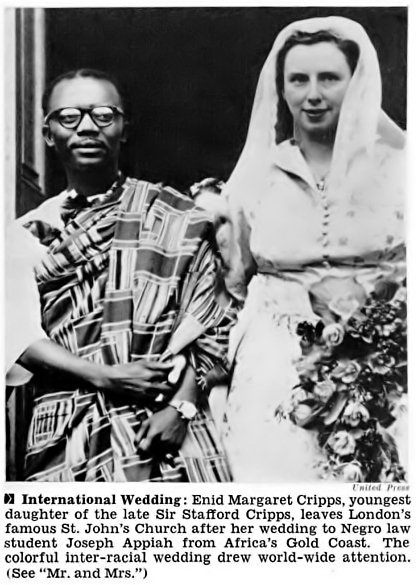 Accounts state that apartheid South Africa’s minister of justice, Charles Swart, described the marriage as “disgusting”.
A correspondent of a Northern Rhodesia (now Zambia) newspaper also wrote that the pictures would “turn the stomach of a pig”.
Appiah (full name Joseph Emmanuel Appiah) was from an aristocratic background, being the son of the secretary of the Asanteman Council from the Asante Kingdom, which in the past years gave the British forces a hell of a time when they attempted to seize the soul of the kingdom, the Golden Stool.
Peggy was born in rural Gloucestershire and was educated at Maltman’s Green school, in Gerrards Cross, Buckinghamshire, before heading to Whitehall Secretarial College, London.
When the two met at a student dance in 1951, Peggy was then working for an organisation called Racial Unity, after having lived in Moscow, where her father was a British ambassador, and in Tehran, where she worked for the British army (railways). 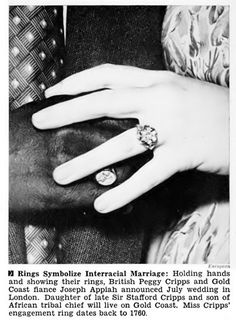 Appiah was studying for the bar at the Middle Temple and was involved in the work of the West African Students Union, a key organisation in the decolonisation process of the African continent.
Despite the challenges they faced, particularly, from the media, the two in 1953 married at St John’s church, St John’s Wood, north London, which had in attendance Labour party personalities such as Aneurin Bevan and Hugh Gaitskell.
It was reported that Kwame Nkrumah (who would later be Ghana’s first president) was supposed to be Appiah’s best man, but George Padmore, the Pan-Africanist, journalist and author took up that role.
Peggy came to Ghana with her husband in 1954 (specifically the Ashanti regional capital, Kumasi), where she easily blended with the people and adopted their cultural traits. 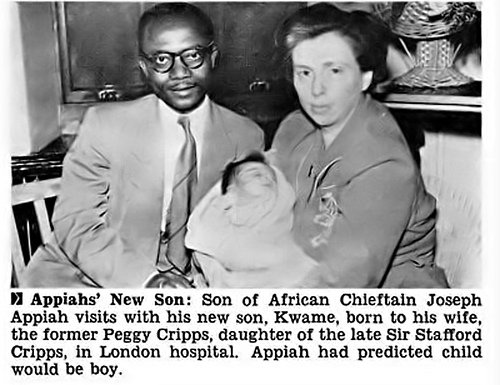 Joe Appiah and wife with their son, Kwame

She had to bring up three of her children (two daughters and a son) largely by herself as her husband, Appiah got imprisoned without trial for over a year after falling out with Kwame Nkrumah, with whom he had earlier worked.
Appiah, who had joined the opposition United Nationalist Party, found himself in jail for 15 months after his severe campaign against a Prevention Detention Act, a legislation that granted Nkrumah the unfettered power to order the arrest and imprisonment of any citizen without trial.
Appiah later formed his own party but would find himself in jail again after being accused of trying to incite a coup.
The lawyer and activist before his death in 1990 was intermittently involved in public life as a diplomat and a government minister following the overthrow of Nkrumah’s government until his retirement in 1978. 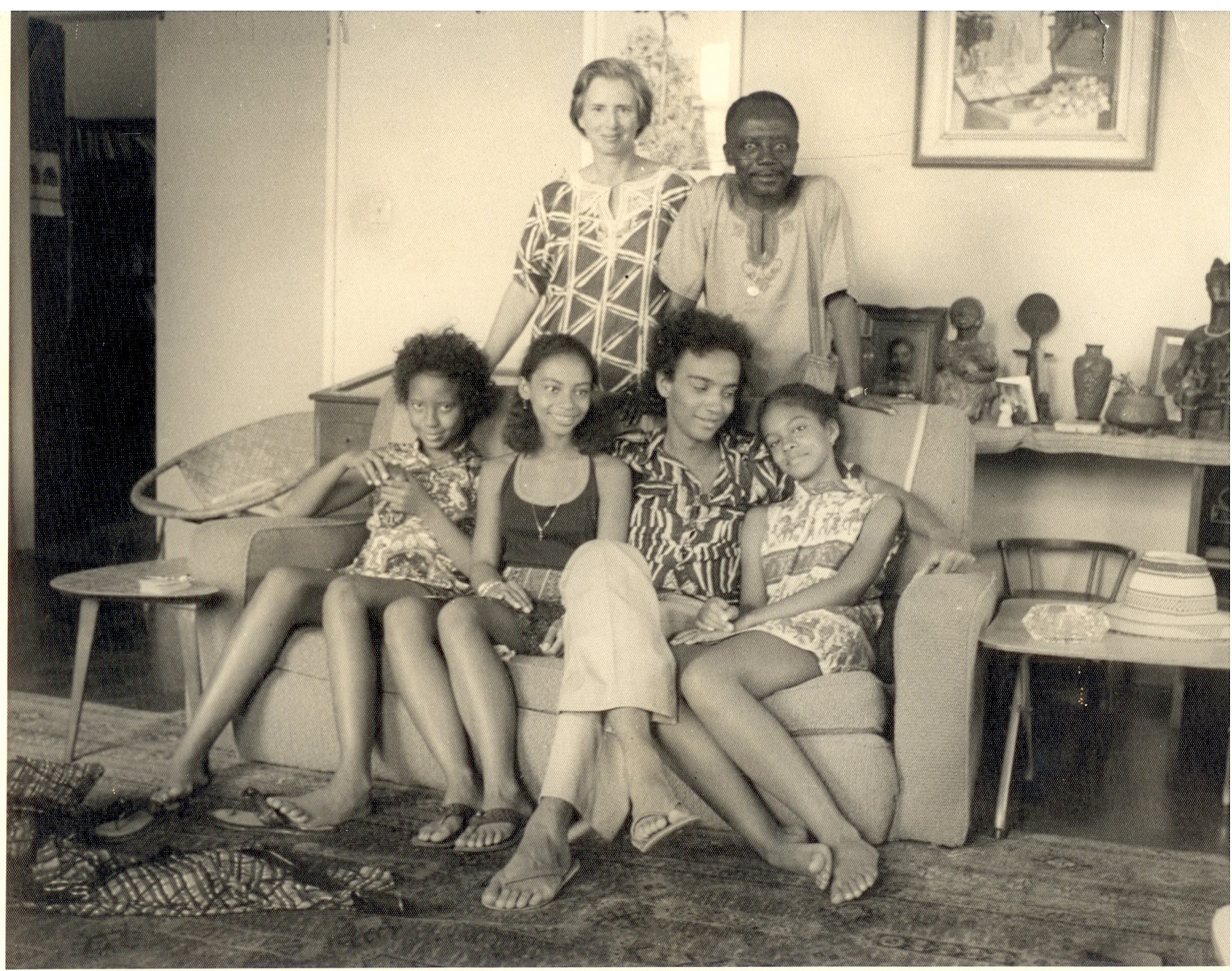 Meanwhile, Peggy learned the language of the Asante, Twi, and became conversant with their folklore which influenced her to write several books such as Yao and the Python (1971); The Children of Ananse (1968); Why There Are So Many Roads (1972); Ananse the Spider: Tales from an Ashanti Village (1966); Kyekyekulee, Grandmother’s Tales (1993) and The Lost Earring (1971).
She also had a collection of 7,000 Asante proverbs entitled Bu Me Be (Tell Me a Proverb) which she co-authored with her son Kwame, and an information officer at the Ghana high commission in London, Ivor Agyemang-Duah.
Peggy further supported the education of many children in Kumasi, and with the assistance of her four children, she founded a school for the disabled at a town called Jachie.
Before her death in 2006, she bought a plot at a cemetery in the Asante town, Tafo, next to her husband’s grave so that she would be buried by his side and not in England.
The couple’s love story influenced a Hollywood scriptwriter living in England, William Rose, to write a script for the production of the famous movie, Guess Who’s Coming to Dinner, one of the first films to explore sexual relations between black and white.