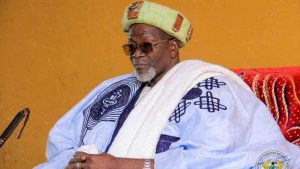 Calm has returned to Nanton in the Northern Region, after a protest by some residents in the area against a decision by the overload of Dagbon, Ya -Na Abukari Mahama II to nominate an Andani as their chief.
The residents had blocked roads and wielded offensive weapons to protest Baba Bawa’s nomination.
Citi News’ Northern Regional correspondent, Diana Ngon indicated on Eyewitness News that though calm had returned to the area, they will resist any attempt to impose Bona on them as their chief.
“They were holding weapons while protesting but they did not hurt anyone.  We gathered that the person they want as their chief is Haruna Sulemana.”
She indicated that the residents have vowed not to accept any Nanton Naa aside Zoosali Naa Haruna Tia Sulemana.
They also prevented Baba Bawa from visiting the town.
Secretary to the newly-named Nanton, Alhaji Anas Abdullah who gave more details on the said protest on Eyewitness News said: “Zoosali mobilized some NPP youth, gave them guns and they are wielding the guns throughout the town.”
“The security is patrolling the area. The youth set up barriers and the security kept looking at them with impunity and it is this impunity that has brought Dagbon to where we are today. If it has started rearing its ugly head then I am sorry for Dagbon,” Alhaji Anas Abdullah added.
–
By: Marian Ansah/citinewsroom.com/Ghana

How VR-Like Immersive Experiences Can Be Produced For Real

Give peace a chance in Dagbon- President urges