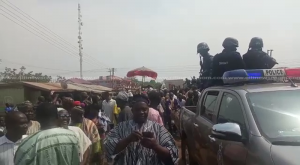 The Yaa-Naa Investiture Planning Committee has appealed to the Interior Ministry for a reduction of the curfew hours as presently imposed on the township.
The town is currently under a 5pm to 7am curfew that was imposed after the selection of a new person to become the Yaa-Naa of the Dagbon Kingdom.
The town has for a long time been placed under curfew which has been reviewed several times due to various violent incidents that have left some dead and many others injured.
The investiture of the Yaa-Naa is scheduled for Tuesday January 29, but the Committee says the curfew is impeding their work.
Chairman for the planning Committee, Alhaji Anass Abdulai told Citi News even though they are minded by the security situation of the town they will plead for a review.
He said the committee will go ahead with its planning should the Interior Minister insist on the current curfew hours.
“We are appealing for a reduction of the curfew hours but we are also conscious of the fact that the security knows best so even if the security doesn’t review the curfew hours, we still will go ahead and organize the program”
Meanwhile, Some residents within the Yendi township fear a stagnation of economic activity should the curfew continue. They say calm has been restored and the curfew must thus be lifted.
“This curfew issue is making the people get fed up of NPP because there is no fight here. I don’t know why this curfew is still there,” a resident said.
Another resident said, “it is affecting us, night businesses have been affected. Those who sell tea and all that at night can no longer do it.
A resident also feared there may be an outbreak of CSM should the curfew continue.
“We are even fearing that if this curfew continues, there may be an outbreak of CSM due to the heat indoors,” he said.
–
By: Sixtus Dong Ullo | citinewsroom.com | Ghana

KTU GENERAL ASSEMBLY MUST PROTECT AND PRESERVE THE SRC CONSTITUTION

How Life Insurance Can Shave Your Capital Gains Tax

Don’t block us from exercising our franchise with examination: Our vice chancellors