Family and mourners of Ya Naa Yakubu Andani II, late King of Dagbon, are continuing with the final funeral rites of the late King at the Old Gbewaa Palace in Yendi, in the Northern Region, amidst heavy security.
The process which began last Friday was suspended after a shooting incident that led to the death of one with others sustaining several injuries.
Six persons were subsequently arrested in connection with clashes. 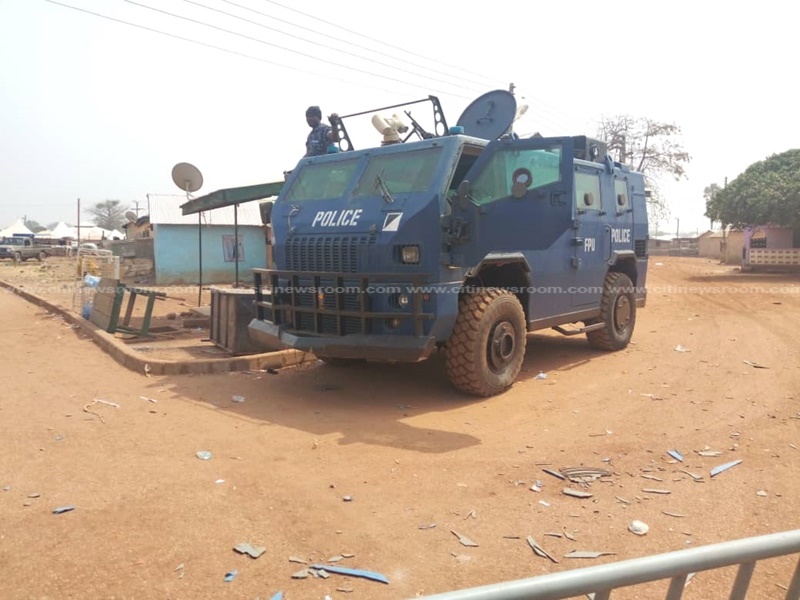 The Inspector General of Police David Asante-Apeatu who was in the Yendi Township on Saturday assured of adequate security for the ceremony.
Security agencies in the Northern Region are also searching every vehicle that enters the town to ensure no one smuggles guns and ammunition to the area for fear of reprisal attacks.
According to Citi News’ Mohammed Alabira who’s on the ground, the new measures were taken after security chiefs including high ranking military and police officers held a meeting to discuss security in Yendi.
Some houses were razed in last Friday’s violent clashes that stalled the final funeral rites, but the Chairman of the Committee of Eminent Chiefs working to ensure lasting peace in Dagbon, Otumfuo Osei Tutu II in a statement on Saturday said the funeral will continue today.
Alabira reported that a symbolic hair shaving of the regents as well as sons and daughters of the late Ya-na is currently ongoing.
He said the Chief Wanzam is doing that of the regents while other Wanzams will take care of that of the sons and daughters.
Per the road-map for the ceremony, circling of the Gbewaa Palace will be done on Thursday, January 17, 2019, and the final adua (prayers) will be held to climax the rites the next day, Friday.
Background
The Committee of Eminent Kings mediating the chieftaincy dispute between the Abudus and Andanis in Dagbon came out with the final road-map on Friday, November 16, 2018, after the final funeral rites of both late Kings was put on hold for several years.
The Committee resolved that the funerals of the two late overlords of Dagbon should be performed in the old Gbewaa Palace in Yendi.
The Abudus were, to begin with, the funeral of the late Yaa-Naa Mahamadu Abdulai IV from December 14 to 28, 2018.
This was to be followed by the funeral of the late Yaa-Naa Yakubu Andani II from January 4 to 18, 2019.
So far that of Yaa-Naa Mahamadu Abdulai IV had been held.
–
By: Godwin Akweiteh Allotey & Mohammed M. Alabira | citinewsroom.com | Ghana

Bono East: Six Reasons Why Atebubu Should Be The Regional Capital

Overeating Healthy Food Is As Bad As Eating Junk Food