Gaborone is the beautiful capital of Botswana named after Chief Gaborone for his effortless protection over the land. The planned city became the capital in the mid-1960’s after Botswana, previously referred to as the  Bechuanaland Protectorate, became an independent nation.

Located in the heart of the city is a hard-to-miss monument with three giant male-bronze statues. Measuring 18ft tall, they are known as the Three Dikgosi Monument, a depiction of three chiefs, Sebele I, Bathoen I and Khama III, who reigned in colonial Botswana and who play a significant role in the country’s history.
The monument serves as a tourist attraction and is the most visited in the capital. The word dikgosi means chief and the monument can also be referred to as the Three Chief Monument, to honour the three popular and powerful chiefs who had ruled different tribes successfully. 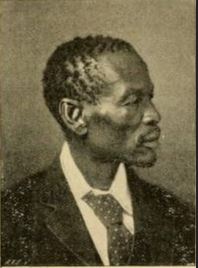 Dikgosi Khama III was very popular and enjoyed support from the British government. During his reign, he worked closely with the British military to protect his people and also protected land from intruders. He ruled over the Bamangwato people and fought in the Matabele war of 1893.
Dikgosi Bathoen I was also a powerful chief known for maintaining peace and order on his land and was good at negotiating and preventing war. He ruled over the Ngwaketse people. 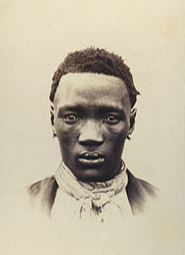 Dikgosi Sebele I was the chief of the Kwena people, one of the bigger tribes in the protectorate. He gained power at a very young age but took up the responsibility very well being able to control his people, offer good advice and ward off foreign danger.
Around the late  1880’s and early 1890’s, the Bechuanaland Protectorate was in danger of being forced to join the British South Africa Company under the command of Cecil Rhodes. The incorporation would mean that the protectorate had no control over itself and would have to adhere to the exploitative rules of the company. Sensing the danger that this brought, the three chiefs had several meetings to brainstorm on how they could prevent this from happening. In 1895, an idea struck them. They decided to pay the Queen of England a visit.
Their idea was not fully accepted and was described as controversial by many other leaders and significant people of power at the time. However, the three determined chiefs got support from the British army and missionaries and went off to England to negotiate for the freedom of the protectorate with the Queen. 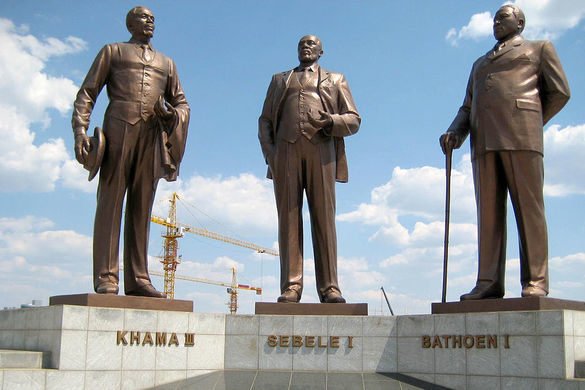 Upon arrival, they were warmly received by Queen Victoria and a meeting was held with the Queen and Joseph Chamberlain who was the then Secretary of the state for the colonies.  There are no accounts as to what ensued during the meeting, meaning that the reasons the chiefs presented to her Royal Highness and the secretary of the state of colonies have been lost to history.
The meeting ended in favor of the chiefs and the whole Bechuanaland Protectorate. Queen Victoria put the country under the direct rule of the crown, thus preventing Rhodes from adding it to the British South Africa Company. The chiefs returned and their brave step would start a revolution in Botswana where local leaders were able to stand up to colonizers until the gaining of independence on September 30, 1966.
The Three Dikgosi Monument was put up by a construction company in North Korea and inaugurated by former President Festus Mogae on September 29, 2005. On the day of its opening, the site attracted close to a 1000 visitors. Each statue has the name of the chief on it with information of their achievements during their reign.  Around the chiefs, six panes that represent national virtues can also be found.
Since its opening, the site has hosted several public and national events. The monument has been described by many tourists as being magnificent and inspiring. It is definitely one of the places to go to when visiting Botswana.

Why Consumer Reports Is Wrong About Microsoft’s Surface Products