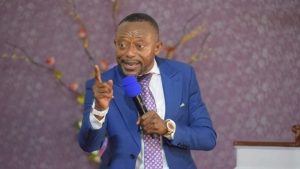 Founder of Glorious Word and Power Ministries International, Reverend Isaac Owusu Bempah, has accused some persons in the opposition National Democratic Congress [NDC] of being responsible for attack on the Odorkor branch of his church.
He further alleged that some elements in the party brought in someone from Salaga in the Northern Region to lead the attack.
While accusing some pastors of also having a hand in the vandalism, he said the attack was targeted as his life and had nothing to do with his prophecy about the death of the National Chief Imam.
“It is a political party behind the attack not Muslims. The attackers did not go there because of the Chief Imam prophesy I gave. I bare no qualms with the National Chief Imam. They were sent by some NDC guys from Salaga.”

“It’s because I said NDC will lose the 2020 elections. They sent him from Salaga to come and kill me Owusu Bempah. As I speak with you, he is in a hotel in Accra. He was sent by some NDC officials,” he said on Ekosii sen on Asempa FM on Friday.
Background
The renowned reverend minister has been in the news a couple of times for his controversial prophecies.
He was in the news recently for predicting the death of some politicians, religious leaders, high profile personalities including the Chief Imam, Sheik Nuhu Sharabutu in 2019.
His prophecy did not go down well with a section of Ghanaians who issued a warning to Rev. Owusu Bempah to retract the prophecy or face their wrath.
They then stormed the church premises at Odorkor on Wednesday, wielding cutlasses and vandalizing parts of the property.
Plastic chairs, an organ and some windows in the church building were damaged; an act condemned by the Chief Imam.
One arrested and granted bail
The Police arrested one person in connection with attack. A statement from the police service said the suspect was arrested by the Accra Regional Police Command at Odorkor to assist in investigations.
It however said the suspect has been granted bail and is to be reporting to the CID Headquarters.
‘I prophesy as God speaks’ – Owusu Bempah defends ‘doomsday’ prophesies
Reverend Isaac Owusu Bempah on Ekosii Sen however defended his controversial prophecies, saying they are not sacrilegious.

He clarified that prophecies come in different ways, and that in some of the prophecies, God speaks directly through him; and so he cannot always determine how they must be communicated.

“When a prophet says if we don’t pray something evil will happen, the prophet should not be condemned. When we see things and we utter them, it is not a sin. It is God speaking through me. God is mightier than any person and we can’t direct him how to go about the prophecies. I don’t prophesy to glorify myself,” he said.
National Peace Council condemns ‘doomsday’ prophecies; calls for calm
In a related development, the National Peace Council has called on Ghanaians to desist from taking the law into their own hands in an attempt to vent their spleen over so-called doomsday prophecies in the country.
The Council in a statement also condemned such prophecies that seem to be igniting some disquiet among a section of Ghanaians.
–
By: Godwin Akweiteh Allotey | citinewsrom.com | Ghana

The post Some NDC elements and pastors behind attack on my church – Owusu Bempah appeared first on Citi Newsroom.
Source link

Teachers Are Not Poor; They Just Have More time to Spend their Income – U/W CAGA Secretary