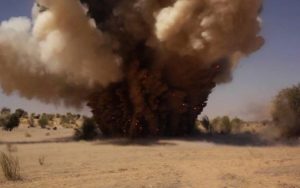 Police personnel have been deployed to a mining site in the Upper East Region after an explosion claimed the life of six people and injured others at Talensi.
The accident is said to have happened early Wednesday morning close to a Shaanxi Mining Company concession.

The District Chief Executive of Talensi, Dr Christopher Boatbil explains confirmed the deaths after checks at a couple of hospitals.
At the Bolgatanga regional hospital, “they had recorded six deaths and four others were in a serious condition that were being treated,” he said.
There were a further 30 persons receiving treatment at a different health institution, the DCE added.
In the meantime, Dr. Boatbil said the assembly was focused on identifying the victims of the explosion.
“What I told the workers of the two facilities was to ensure that we get the identity of the victims because we wanted to know whether the people who have suffered this calamity are workers of Shaanxi Mining Company or are illegal miners or other groups of people that may have gone into the pit.”
Dr. Boatbil said police were expected to question officials of the Chinese owned mining company.
“Other people that we suspect might also involved will also be invited by the police station to answer some questions,” he added.
The mining company has refuted speculation that the explosion occurred on its concession.
Public Relations officer of the Shaanxi Mine, Maxwell Wooma “all these matters that have been reported are all actually matters that occurred outside the mining area Shaanxi Mining Ghana Limited.”
He explained that the speculation may have been because an illegal miner had also tried to steal ore from their concession before the explosion.
The miner was involved in an accident in his attempt to escape from the Shaanxi Mining concession.
“We subsequently reported it to the police at our side here and released our ambulance for them to take this illegal intruder to the regional hospital for treatment,” Maxwell Wooma said.
Shaanxi Mining Ghana Limited had its licences suspended in 2017  for investigations into the company’s underground operations and the alleged death of about seven miners in the area.
It was eventually allowed to commence operations on August 28, 2017, after a three-month suspension because the company had improved safety standards.
[youtube https://www.youtube.com/watch?v=MdCEs0KNIDY]
–
By: Delali Adogla-Bessa & Zoe Abu-Baidoo | citinewsroom.com | Ghana

Anna Kendrick Had The Most Perfect Response To Gigi Hadid