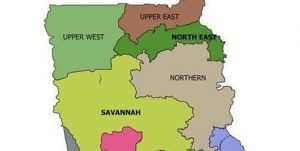 The Savannah Region is set to be carved out of the Northern Region following a massive YES vote by residents of the area.
99.7% of persons who cast their ballots voted YES in the referendum held on Thursday, December 27, 2018.
Only 0.3% of the entire population of the Savannah area voted NO with an 81.9% voter turnout.
contextly_sidebar id=”yOvikYiI9NCWwwUiNdCkEdWuMzetbBKr”]About 203,650 of the residents voted YES while 649 voted No.
The Electoral Commission held the referendum for the creation of six new regions in the country on Thursday.
Per the Legislative Instrument governing the referendum, C.I. 109, about 50% of voters within the proposed catchment region must take part in the exercise and it must also record an 80% yes vote.
“In the Referendum for the creation of a region, the issue shall not be determined unless at least fifty percent of the persons entitled to vote cast their votes at the Referendum and of the votes cast at least eighty percent cast their votes in favour of that issue.”
Bawumia votes in proposed North East region referendum
The Vice President, Dr. Mahamadu Bawumia earlier on Thursday cast his vote in the referendum.
He cast his vote at the Kperiga Presby JHS ‘A’ Polling Station at Walewale in the proposed North East Region, at about 9:20 am.
Speaking to the media after voting, the Vice President urged voters in all of the six proposed regions to turn out in their numbers to exercise their democratic right.
He said the process is not partisan and must be treated as a national duty be persons in the affected areas.
Other areas that had the referendum organised for them include: North East, Ahafo, Bono East, Western North and Oti.
Already, government has assured that each of the proposed new regions will be given GHc20 million if they are approved in the referendum.
–
By: Godwin Akweiteh Allotey | citinewsroom.com | Ghana

SPAIN IN FRONT OF A HISTORIC CROSSROAD

How VR-Like Immersive Experiences Can Be Produced For Real