The Tamale Metropolitan Director of Agriculture, Mr. Abdulai Iddrisu Adama has stated that the implementation of the government’s flagship programme ‘Planting for food and jobs,’ so far has been successful.

According to him, the programme has brought relief to many farmers by reducing the cost of production. The cost of production, he said, has been halved through the subsidy on seed and fertilizer.
He said the 2018 farming season recorded the highest rainfall in recent history with an average of 185 millimeters in a month with August recording a peak of 344 millimeters.
This, he noted, resulted in farms in the metropolis getting flooded resulting in the low yields of crops such as maize. Rice yields from data collected, Mr Iddrisu noted, has improved from the previous year’s average of 10 tons per hectare to 3.1 tons per hectare which is higher than the national projection of a 30 percent increase.
Speaking to farmers, chiefs and elders at Yong Dakpemyili, a farming community in the Tamale metropolis to commemorate the 34th National Farmers Day, the director indicated that the veterinary area has been successful in terms of animal diseases as there has not been any outbreak of diseases in the metropolis so far. He said over 16,000 livestock has been vaccinated against the major diseases such as anthrax and CBPP.
He added that little over 100,000 birds have also been vaccinated against Gumboro, Newcastle, Lasota and Fowl pox. Under the NABCO programme Feed Ghana module, a total of 158 trainees were posted to the department and 121 have so far reported and have since been assigned to various communities to enhance extension delivery in the metropolis.
This intervention, he said, will improve agriculture productivity. The event witnessed twelve categories of deserving award winners chosen within the metropolis based on the national standard selection criteria. The overall best farmer, Mr. Thomas A. Adam received a brand new motorbike, 5 cutlasses, 2 bags of fertilizer, a radio set, a sprayer and other farm equipment. 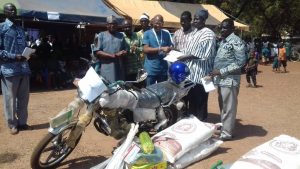 These awards the Director indicated will motivate the recipients to do more and also encourage other farmers to emulate and follow the best farming practices to increase their yields. The objective of Farmers’ Day is to acknowledge and appreciate the important role and contribution farmers play in our national development.
BY: LILIAN D. WALTER

Thanks to VR, your office will resemble a tropical island