The Gurunsi or Grusi people are cluster of Gur-speaking peoples of larger Niger-Congo language family found in Northern Ghana and Southern Burkina Faso. The population of  Gurunsi in Ghana is estimated to be approximately 976,311 and  in Burkina Faso an estimated population of 1 million.

The Gurunsi people of Ghana and Burkina Faso are known for their elaborate murale design painting houses and its architectural designs as well as their  (sculptural) zoomorphic masks, covered with geometric motifs. The masks have concentric eyes and  polychromatic effects in black, white and red. Winiama sculptures are the most geometric.


The name Gurunsi comes from the Djerma language of Niger words “Guru-si”, which means “iron does not penetrate”. It is the Mossi that gave this name to the diverse peoples that live in Burkina Faso, to the west and south of the Mossi plateau.  The Mossi have never succeeded in controlling the Gurunsi. This name has a pejorative sense for the ethnic groups concerned: the Winiama, the Nuna, the Nunuma, the Lela, the Sisala…The Gurunsi (Gourounsi) are made up of about 300,000 people. The largest ethnic group is that of the Nuna.
The Kasena, Nuna, and Sisala refer to themselves as Gurunsi, talk about Gurunsi songs and Gurunsi customs and traditions, and the Nuna even consider themselves as the best preservers of the Gurunsi traditions, where the old customs and practices still stand. Although of uncertain origin, the term Gurunsi is still currently used, at least by these three groups, as recognition of their common cultural and lin­guistic ancestry because they share the same cultural traits and language roots and even bear the same facial marks.
Language

The Grũsi or Gurunsi languages are a group of Gur languages, comprising about 20 languages spoken by the Gurunsi peoples. The Grũsi languages are spoken in northern Ghana, adjacent areas of Burkina Faso, and Togo.
Inline Related Posts

The largest language in the Grusi group is Kabiye, a language spoken by approximately 1,200,000 people (of which 550,000 are native speakers) throughout central Togo.


History
Oral traditions of the Gurunsi hold that they originated from the western Sudan near Lake Chad. While it is unknown when the migration occurred, it is believed that the Gurunsi were present in their current location by 1100 AD. Following the 15th century, when the Mossi states were established to the north, Mossi horsemen often raided Gurunsi areas for slaves, but the Gurunsi peoples were never fully subjugated, remaining independent. 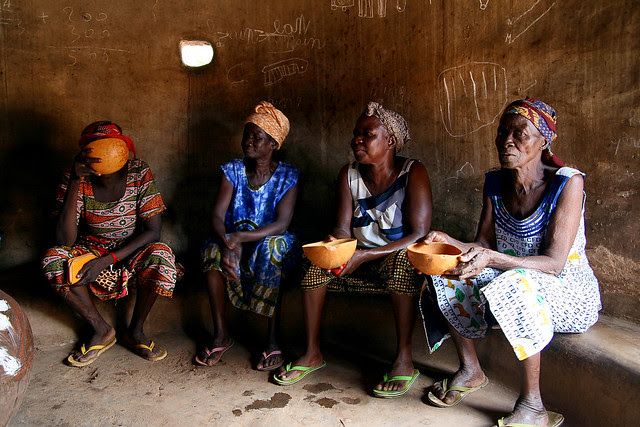 According to doctor Salif Titamba Lankoande, in Noms de famille (Patronymes) au Burkina Faso, the name Gurunsi comes from the Djerma language of Niger words “Guru-si”, which means “iron does not penetrate”. It is said that during the Djerma invasions of Gurunsi lands in the late 19th century, a Djerma leader by the name of Baba Ato (better known by the Hausa corruption of his name: Babatu) recruited a battalion of indigenous men for his army, who after having consumed traditional medicines, were invulnerable to iron.
The 1884 Conference of Berlin, which partitioned the continent of Africa into European colonies, saw the French, British and Germans each claiming part or all of Gurunsi territory. After establishing the protectorates of Yatenga (1895) and Ouagadougou (1896), the French annexed Gurunsi lands in 1897. Eventually the Germans withdrew to Togoland (modern Ghana & Togo), and an 1898 Anglo-French agreement officially established the boundary with the Gold Coast (now Ghana). This partition divided Gurunsi peoples among French and British administrative systems, facilitating the political and cultural divergence of sub-groups on each side of the boundary.
Inline Related Posts


The Religious Beliefs of the Gurunsi (Gourounsi)
The Gurunsi (Gourounsi) believe in a God creator called Yi that distanced himself from man after creating the world. Yi gave Su the task of taking care of man. Su is represented in both the masks and the statues. An altar is consecrated to Yi in the centre of the village. Moreover, each clan keeps magical objects in a hut that allows them to communicate with the forces of nature.
When the rituals are correctly carried out, the Gurunsi (Gourounsi) enjoy both prosperity and fecundity. A magician’s renown can travel far. A diviner owns many different magical objects: wooden or bronze statues, clay balls, and wooden staffs decorated with figurines.
Social Organisation, and Initiation among the Gurunsi (Gourounsi)
Initiation happens every three, five or seven years, depending on the village. The initiation lasts fourteen days and takes place next to an area of marshy land.
The use of masks is taught to the young initiates who also have to undergo a series of moral, physical and intellectual tests. At the end of the initiation the young initiates return to the village and give offerings to the Su spirit.
The young initiates dress in clothes made of fibres and dance on market days until the rainy season begins. Only those that dance well will be granted, by the elders, the right to put on the costume and dance again.
Throughout the year, if health or prosperity is threatened, libations of blood are made and poured over a magical object or a new mask might be made.
Gurunsi (Gourounsi) Masks
The masks represent the spirits of the bush.
The Nuna, the Nunuma and the Winiama create masks in the form of animals coloured in black, red and white. These masks can only be differentiated by their horns and their ears. These groups sculpted masks representing buffalo, snakes, antelope, warthogs, hyenas, hornbills and crocodiles. The eyes are bulging and framed by concentric circles. The muzzles are quite short for animal masks. There are other more abstract masks that have wide protruding mouths. These masks, decorated with geometric forms were repainted every year.

The wearer of the mask would disappear underneath his fibre skirt and move about in the manner of the animal whose mask he was wearing.
The Nuna, Winiama, Lela and Nunuma have influenced the style of the masks of their neighbours the Bwa and the Mossi.
The masks belong to an individual, and are given to his son at his death or stored in the ancestor’s hut.

The masks play an important part in the ceremonies that mark the end of an initiation, funerals of notaries or entertainment that is organized on market days.

Bush masks are consecrated to the spirit of Su, but there are other masks associated with hunters or farmers.
Gurunsi (Gourounsi) Statues


Gurunsi (Gourounsi) statues are kept in the villager’s huts or on family altars and are used for divination purposes.

Gurunsi Painted Homes
Africa is one of the last poorly studied continents, due mainly to political issues of western society. It has had a rich history that was largely looked over and forgotten in more modern times. When Europe was relearning how to run a modern civilization, Arabs in African were advancing modern thinking. Africans have a rich history of art,though it is not art in the western sense. Their art all has a meaning and purpose beyond being beautiful, remove it from its context and you have taken away its purpose and its reason for being created.
One of the oldest still surviving forms of art is rock paintings,though it has advanced beyond the cave and onto the buildings. Some tribes still practice this form of that ancient tradition. The Gurunsi people of Ghana are known for their elaborate houses. The Gurunsi is a collection of several tribes that habituate the northern region of Ghana. This is a group about tribes that are united by common language, histories and political dealings. Most of these tribes still create mud huts to live in. The mud huts that they create are unique to their culture and are elaborately decorated in ancient symbolic patterns, carrying on this very African tradition. 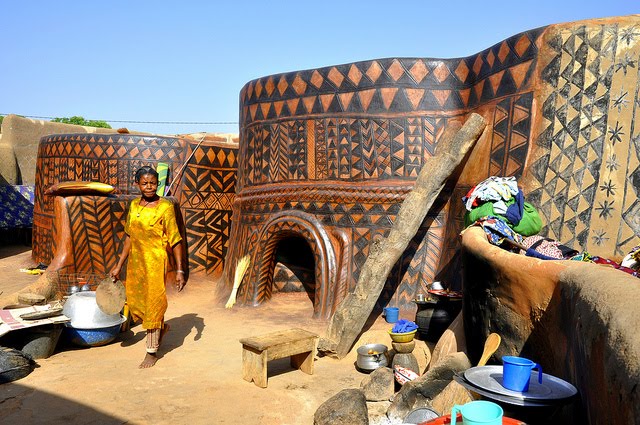 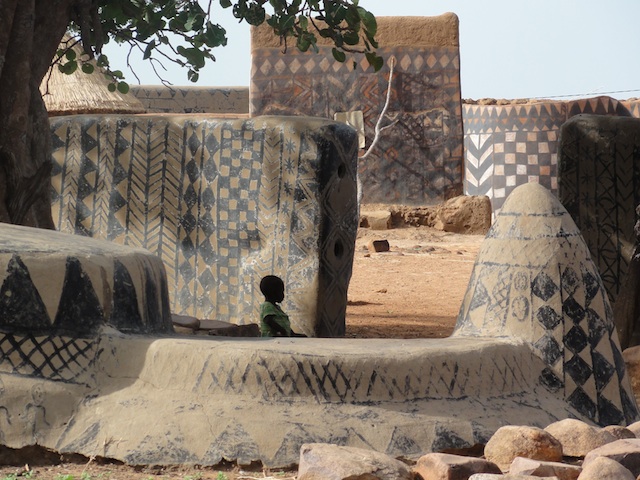 These tribes mainly consist of farmers growing millet,sorghum and yams,rice, corn, peanuts and beans, which utilize the method of slash and burn farming and rotating fields regularly. The men do most of the farming though women usually have small plots that are mainly used for cash crops, over the staple food grown by the men. 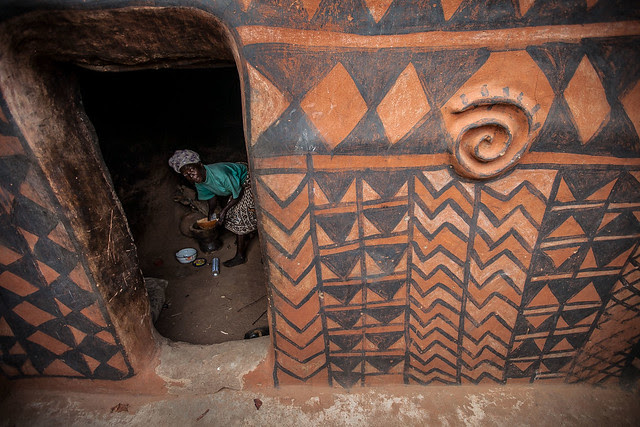 When the season is right the men go out and hunt as well, both for food and as a ritual experience to connect with nature. They still retain a traditional governing system mainly consisting of a council of elders, without one central leader. Religious leaders are mainly responsible for the day to day issues that occur, including designating land and harvest times. 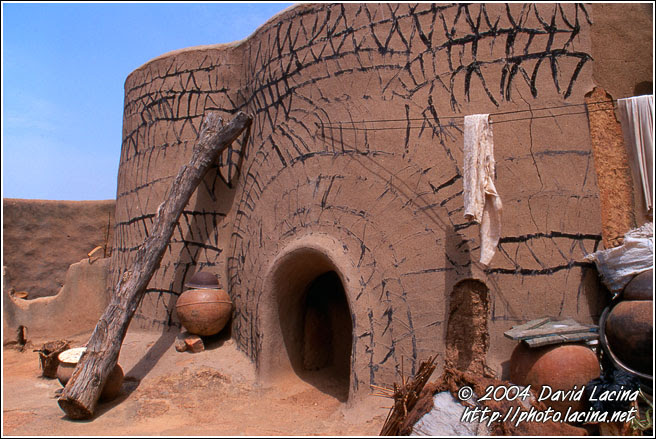 The religion in the region revolves around the God Su, whose spirit is thought to be harnessed in the form of a mask,for both beneficial reasons for their people and harmful reasons for their enemies. There is a shrine located in the center of every village dedicated to Su to ensure he is happy, and to make sure communal harmony is achieved. Each family is individually responsible for maintaining the shrine. The Kassena and Frafra are known for their elaborate masks and for their spectacularly decorated homes. The main village of the Kassena is called Tiébélé located in the Sothern region of Burkina Faso bordering Ghana. This city has some of the best examples of the Gurunsi decorated architecture. The majority of the people still live in the traditional homes made of mud walls, usually a mixture of clay,straw and cow dung, either round or more rectilinear in form;though modern techniques have helped in the building process, utilizing mud bricks and stone foundations. The shape of the home is very significant, the square home is only for married couple and the rectangular home is for bachelors, to old to live at home but not yet married.
Like most homes in the harsh climate of Africa,they have been adapted to the local weather conditions. The walls are thick to trap the harsh light of day and warm the home at night when the desert turns cold. There are also minimal openings to the exterior, usually only the entrance. This form of building also severed as protection against the warring tribes of the region,making the dwellings significantly easier to protect. The homes of the people in this city are like many found in other parts of Africa except for one key feature,the exterior of the homes are elaborately decorated with hand painted deigns and murals.
Inline Related Posts
See also  Sad News: 7 Year Old School Girl Killed By Motor Rider at Damongo

With all African art there is a very powerful meaning and purpose behind what they do. Traditionally there is never art for arts sake, it has a purpose beyond looking pretty and decorating a space. They do have a concept of beautifying something called bambolse,roughly translating to mean embellishment or decorated. The Gurunsi people use this concept to decorate their homes in symbolic patterning and designs. The Frafra and Kassena tribes create these beautiful homes, in a remarkably similar  fashion. A study was done on the traditions and meaning behind the Frafra structures in the village of Zuarungu. The compound that they live in is known as the Yiri,starting out in a circular form but as the compound grow sit becomes more ovular.
source: http://victoriabischof.weebly.com/uploads/1/7/2/0/17209968/africanpaper.pdf
EARTH HOUSE DECORATIONS OF GURUNSI PEOPLE
Gurunsi mural 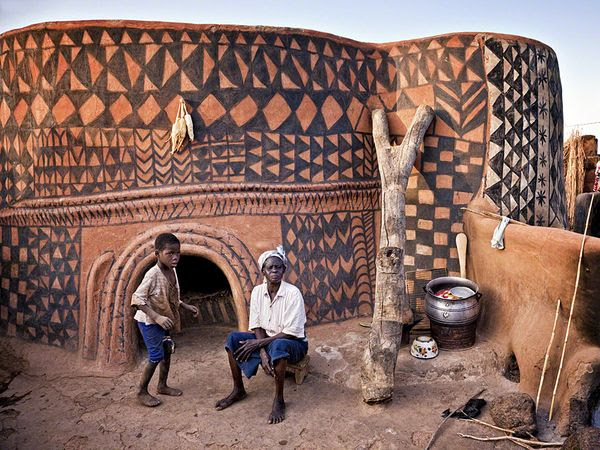 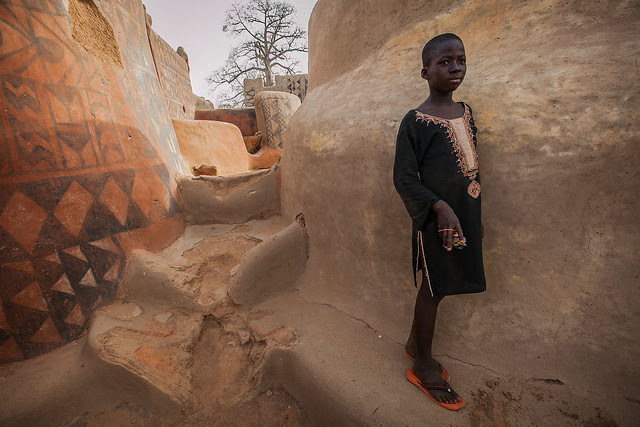 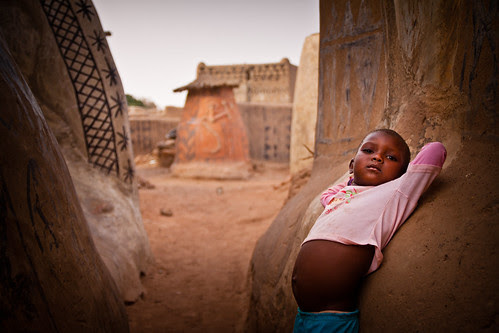 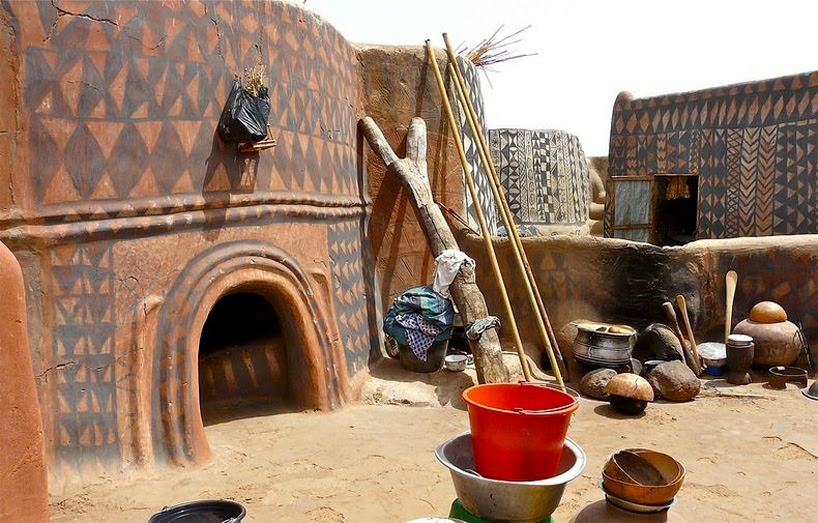 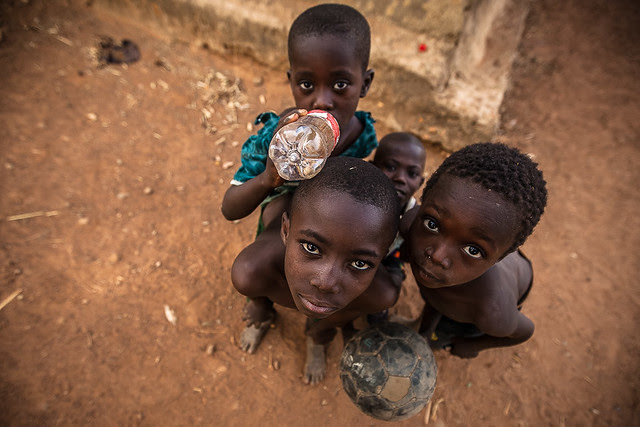 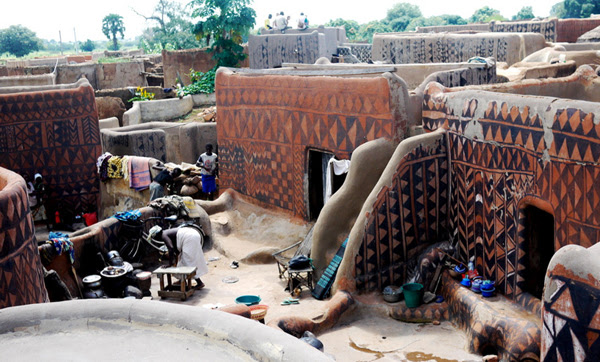 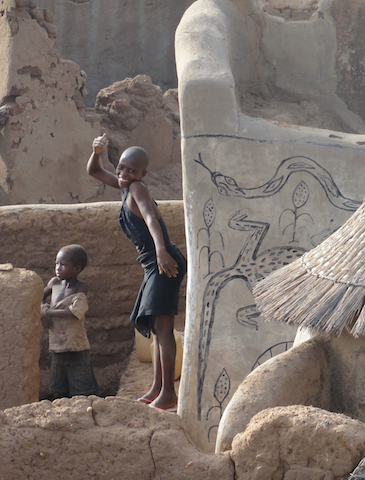 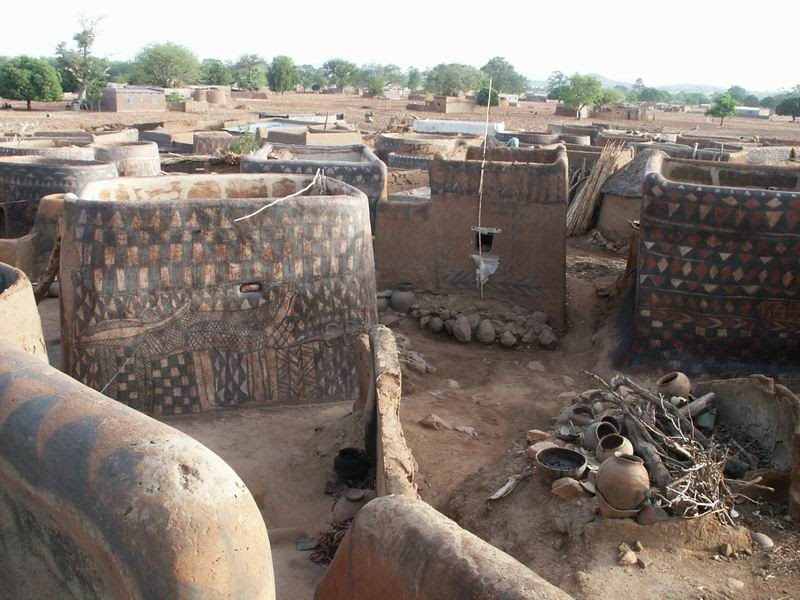 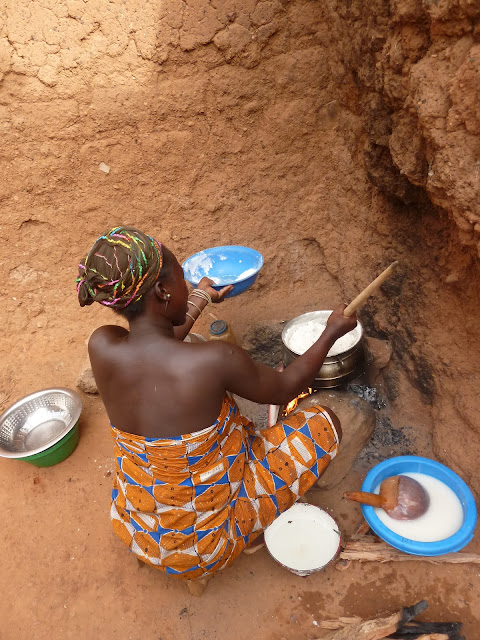 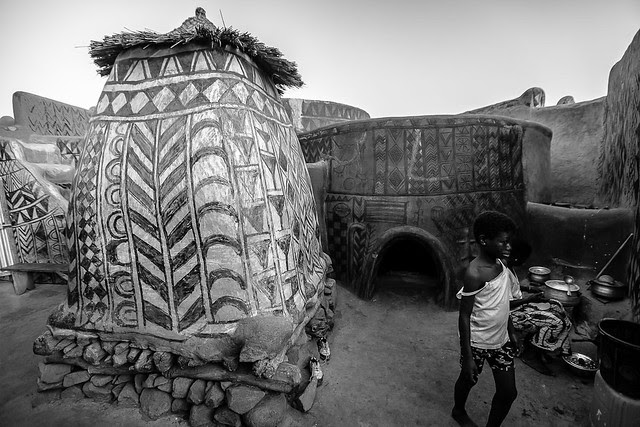 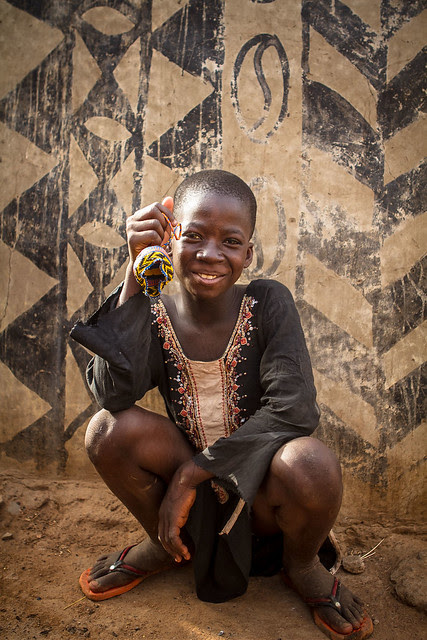 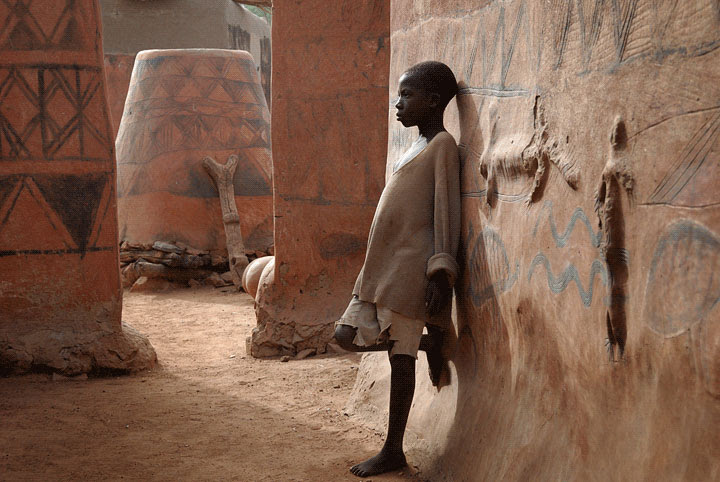 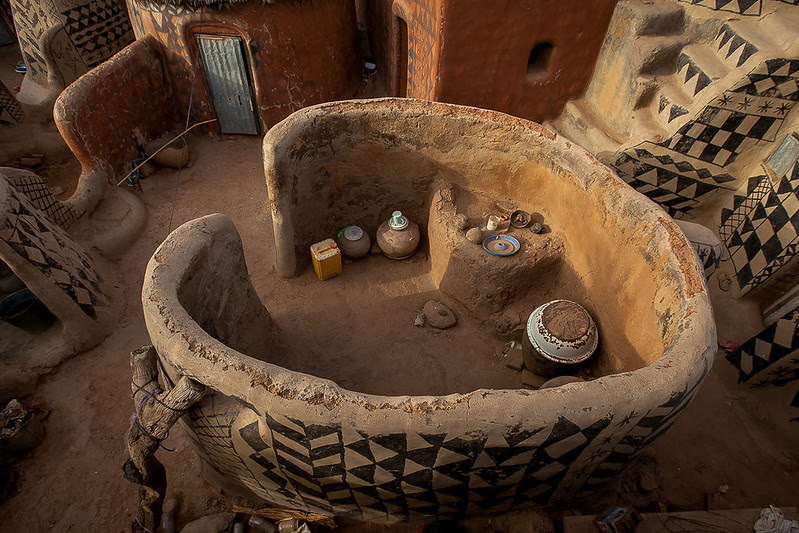 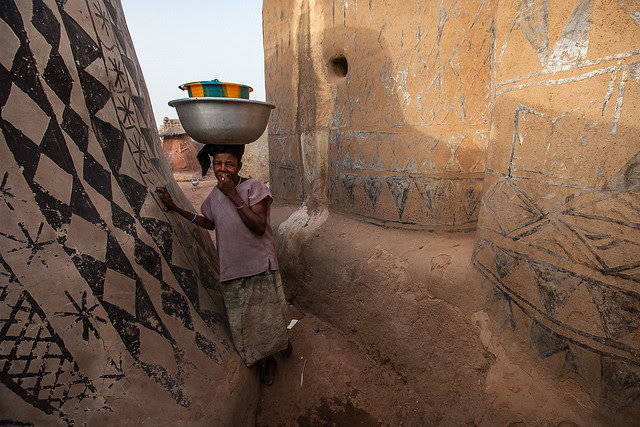 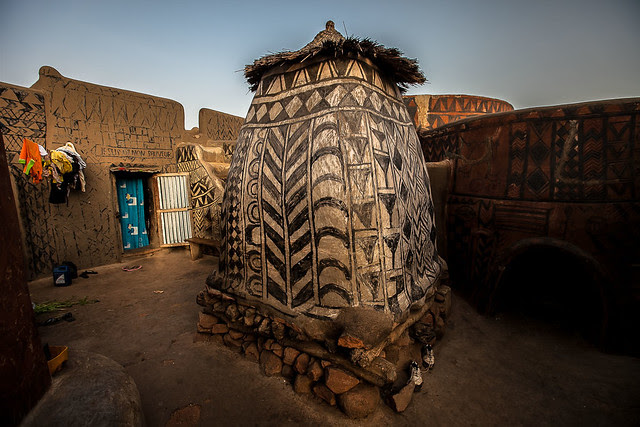 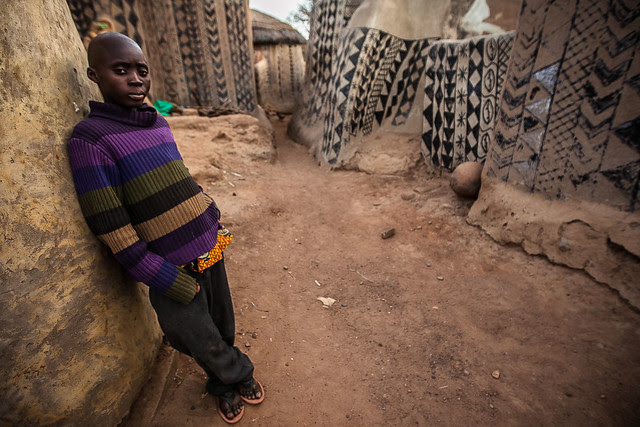 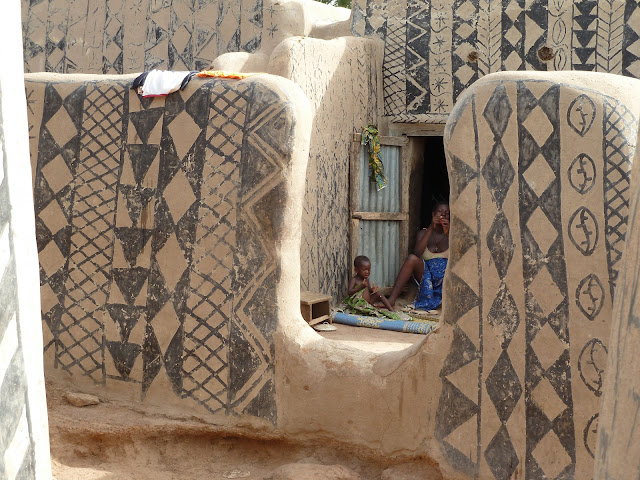 The Story of Princess Yennenga, Mother of the Mossi People in Burkina Faso

Am proud to be a Grusi boy