Britain’s King Edward VIII is not the only 20th-century royal to give up his throne for love as in 1948, Seretse Khama, chief of the Ngwato or Bamangwato people, (present-day Botswana) was forced to do same when he married a British woman, Ruth Williams.

Seretse Khama, then prince, of the British Protectorate of Bechuanaland (now Botswana) met Ruth Williams, a white woman when he was studying law in London in the summer of 1947.

Williams was then working as a clerk at Lloyd’s of London, an insurance market. The two first met in June of that year at a London Missionary Society dance when Ruth’s sister Muriel introduced them.

During that period in Britain, only 0.02 per cent of the people were black and interracial marriages were largely absent. A white girl who was seen out with a black man was deemed not “respectable”.

When Williams met Khama, she did not know that he was the heir to the throne of the chief to the Bamangwato people of Bechuanaland. All she knew was that this man was studying law at Inner Temple, London.

After finding a common interest in jazz, the two would go out on their first date and would start their relationship on a platonic note before developing it further into “one of the great love stories of the world.”

In spite of the challenges they faced, especially from the media, particularly with the fact that Khama was royal, the two were still sure of each other.

“Perhaps the most humiliating of my experiences has been the attempt [by the press] to cheapen my romance with Ruth, to prejudice the public against us by making it seem like a shocking scandal. Ours was no dance-hall ‘pick-up’ meeting as some people have claimed,” Khama said in an interview with Ebony magazine in 1951 as seen by The Telegraph.

“…We both must have had subconscious fears of what the future held for us if we allowed ourselves to become serious. There was a feeling in my land – strong feelings about what was white and black – and I suppose both of us wondered secretly what future could there be for us: an African prince and a white English secretary.”

“But in matters of love the heart is seldom ruled by skin colouring,” he said.

The challenges got worse when the two were planning for their wedding as they had to go back and forth with religious officials who insisted that they needed approval from the local bishop before they could bless the marriage.

The two eventually got married in 1948 to the anger of many, including relatives of each partner. 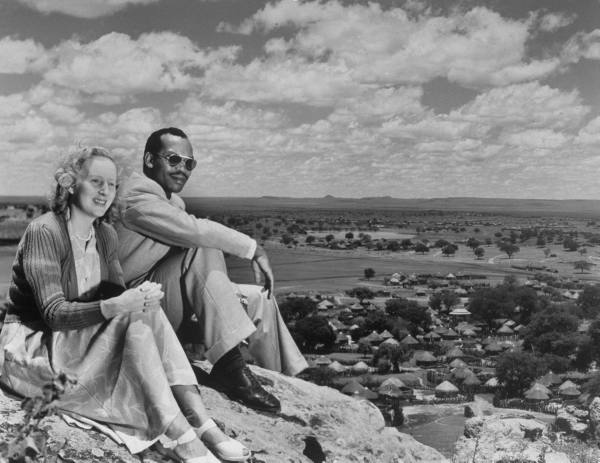 Khama’s uncle, who was ruling in Seretse’s stead while he was being educated, said: “If he brings his white wife here, I will fight him to the death.”

Williams also found out that she had been thrown out of her family home and in London, the two could not find accommodation as many landlords were not willing to provide their homes to a mixed couple.

The British government also raised serious concerns over what an interracial marriage would do to international relations between them (British government) and South Africa, Botswana’s neighbouring country that had just passed a law against mixed marriage.

Having banned interracial marriage under the apartheid system, South Africa was not ready to have an interracial couple ruling just across their northern border.

As Bechuanaland was then a British protectorate (not a colony), the South African government wanted Khama immediately removed from his chieftainship.

According to accounts, Britain’s Labour government, then heavily in debt from World War II, could not afford to lose cheap South African gold and uranium supplies and so heeded to this call.

“There was also a fear that South Africa might take more direct action against Bechuanaland, through economic sanctions or a military incursion. The British government, therefore, launched a parliamentary enquiry into Khama’s fitness for the chieftainship. Though the investigation reported that he was in fact eminently fit to rule Bechuanaland, “but for his unfortunate marriage”, the government ordered the report suppressed (it would remain so for thirty years), and exiled Khama and his wife from Bechuanaland in 1951,” according to accounts by Trip Down Memory Lane.

Many groups protested against the decision, describing it as British racism and even called for the resignation of Lord Salisbury, the minister behind it.

The British High Commission made attempts to have Khama replaced but the people refused. Exiled in London in 1951, Khama and Williams were eventually allowed to return to Bechuanaland in 1956 as private citizens after he had renounced the tribal throne. 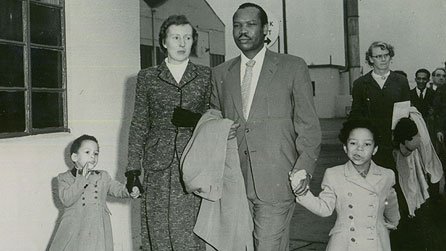 Khama entered into local politics, being elected to the tribal council in 1957. In 1961, he founded the nationalist Bechuanaland Democratic Party, which dominated the 1965 elections.

After becoming Prime Minister of Bechuanaland, Khama pushed for Botswana’s independence, from the newly-established capital of Gaborone.

A 1965 constitution defined a new Botswana government, and on September 30, 1966, Botswana gained its independence, with Khama acting as its first President.

Khama’s love story which will later help lift the ban on interracial marriages in the West produced one daughter, Jacqueline, and three sons, Ian and twins Anthony Paul and Tshekedi Khama.

The couple were happily married until Khama passed away in 1980. Their love story was featured in a 2016 biographical film, A United Kingdom, starring David Oyelowo and Rosamund Pike.