An important question about the beginnings of history in the area now inhabited by Bulsa is how long people have been living here and who these people were. No archaeological excavations have ever taken place within the two Bulsa districts. Therefore, we can only adopt research data from other parts of Northern Ghana to answer our question.
In the millenniums before Christ (BC), the Sahara, which had not been completely infertile before, became dryer and dryer making it difficult for people to live there. The consequence was a migration, particularly of cattle-herders, from the Sahara to the south, which in some way might have also affected the Bulsa area.
We do not know much about the original inhabitants of this area, but they were probably hunters and gatherers. Many Bulsa told me that these people liked to live in caverns, and some Bulsa even claimed that they came out of the earth itself, which probably means that they were the original inhabitants.
In the absence of excavation results for the Bulsa area, I wish to mention two objects which have been in use among the Bulsa and other ethnic groups for many centuries up to even very recent times and which were also found in excavations of the early Iron Age and Kintampo culture (endnote 2) of middle and southern Ghana.
a) Twisted iron bangles with or without loops (Buli bang gbing respectively bang) were excavated near Daboya by Shinnie and Kense and, according to the archaeologists, they belong to the early iron age (1988: 203 and 208). They are known from other excavations in Ghana and are distributed over large parts of West Africa.
In his analysis of the objects excavated at Yikpabongo (N.R.), J. Anquandah writes about these iron bangles (1998: 97):
The twisted iron lightweight pendant/bangle with loops found in the excavations has a direct parallel in modern Bulsa culture and is known as Bang-gbin (fig. 6.16). 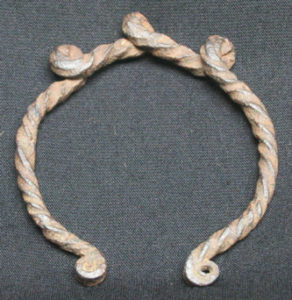 b) Stone bracelets (Buli nisa pung), worn on the right upper arm by Bulsa until recent times, were found in Daboya, too. Apart from bracelets made from a greenish stone, two pieces are described as having been made of a “black stone mottled with white”. Furthermore, “All the bracelets… are triangular in section and have been ground smooth…” (Shinnie and Kense 1988: 178). Polished marble arm-rings, which are D-shaped in cross-section are also known from Kintampo sites (Ozanne 1971: 42). 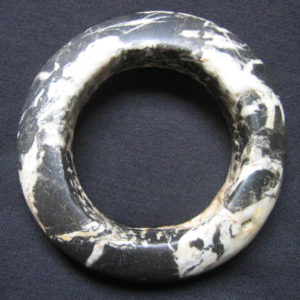 In the last phase of the Kintampo culture (beginning around 150 BC) metallic iron was extracted from iron ore as industrial centres in the Brong Ahafo Region and Northern Ghana have proved. For producing iron, the Bulsa used their local iron ore (balerik, a type of ‘gravel’), which is found in big quantities in many parts of the Bulsaland. Their technique was only given up some decades ago, when scrap iron as material for new iron objects was easier to get (cf. Kröger 2001: 404-409). We may assume that producing metallic iron from iron ore had a very long tradition here, although there is a lack of any exact dates obtained through excavations. In some Bulsa villages, iron-ore slags are scattered on the farmland so densely that the farmers had to collect and heap them up (see photo). 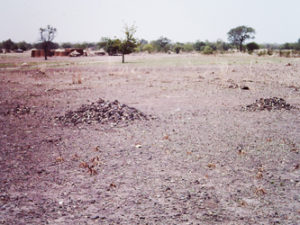 Heaps of slags on a field in Kadema

Around 1000 AD cowrie shells (Buli lig-piela) were introduced into West Africa and soon became not only an element for decorating both the human body and material objects, but also a widespread currency in West Africa. The first cowries (Cyprea moneta) had to be transported from the Maldives by way of North Africa so that their value was not mainly based on their material but on the costs of their long transport. In the 19th century, large quantities of a slightly different type of cowrie (Cyprea annulus) were introduced by European merchants from East Africa and were also accepted by the West African population as their currency (Cf. Johnson 1970 and York 1972).
Among the modern Bulsa both types of cowries can be found, but we do not know anything about their origin in this area, because cowrie-money circulated over large areas of West Africa.
Archaeological excavations closest to the Bulsa were carried out by J. Anquandah and after him by B. Kankpeyeng among the Koma (N.R.). In Yikpabongo Anquandah found both types of cowries, Cyprea moneta and Cyprea annulus (Anquandah 1998: 77-78).
The large volume of imported cowrie shells caused their value to depreciate so that higher units of payments were necessary, e.g. baskets or bags of cowries. The Buli term boosa (or boorisa), in the past corresponding to 200 cowries or one bag, is still used at Bulsa markets. Today one borik (singular of boosa) equals two Ghana Cedis.

See also  Ethnicity And The Making of History In Northern Ghana

Upper East: 47 Attempted Suicide Cases Recorded In First Half Of 2021

The Dagbon Conference of 1930

History Of The Fare-Fare People Of Ghana

What Do you know about the Dagaaba people? (1)

Franz Kröger: I like it if other people share or quote my texts on the history of the Bulsa, but it is a matter of scientific honesty to mention the source and the author of the adopted text (including the colour photo). The drawing published above is not from me. It was taken from Binger “Du Niger au Golfe de Guinée”, Paris 1892, page 471. Again the author of the post in NORTHERNGHANA.NET does not mention the author or the source. In Binger’s book there is not reference to the battle of Sandema in connection with the drawing.
There are more articles where the author just copies my texts without any reference.